Have a nice meal in a good atmosphere

Our restaurant is open daily.
It’s also possible to have dinner in our lovely garden (heaters available).
If you would like to book a table for dinner, please use the Formitable widget or phone us.
Follow us on social media to stay informed at all time.
You can find more information about our daily specials and other varying dishes in the order now window. It's not possible anymore to make your take away order online but you can call us to order a take out. 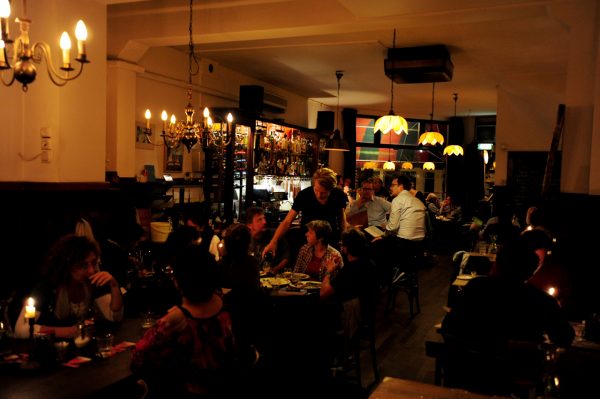 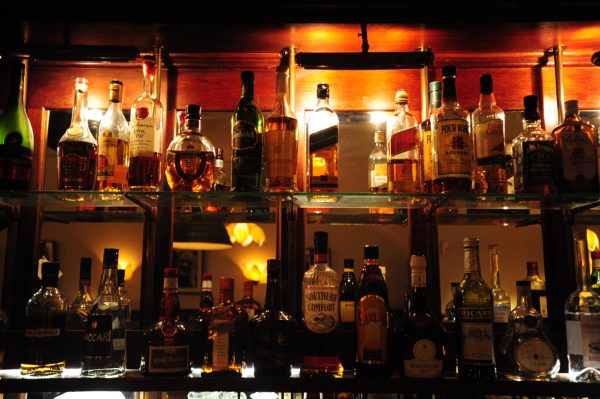 Having a nice dinner in a relaxed atmosphere, and comfortably enjoying a perfectly served beer or a good glass of wine, without much fuss; that is our aim at Eetcafé van Beeren.

Our restaurant offers an alluring combination of meals, ranging from Dutch pub food to Mediterranean masterpieces. In addition to this, daily specials are available for a decent price; these are much in demand so make sure to order early!
Dining at van Beeren takes place in the ambience of a classic Amsterdam ‘brown café’, by pleasant candlelight at quaint wooden tables, or at the bar. During summer we welcome you to our romantic, enclosed garden, where you can enjoy delicious summery dishes, a glass of wine or beer, and do so in peace and quiet, a stone’s throw away from the Nieuwmarkt. Feel free to come and be delighted at Eetcafé van Beeren!

We accept Maestro and Vpay debit cards and Visa and Mastercard credit cards! 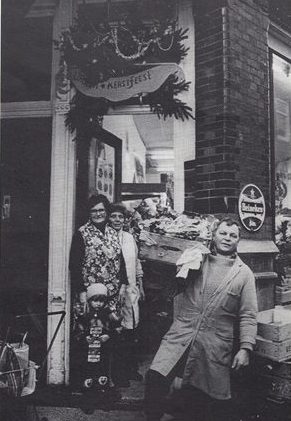 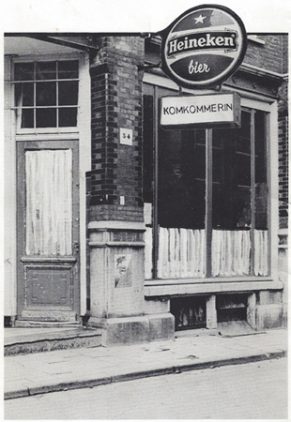 Eetcafe van Beeren is one of those hidden gems that make Amsterdam catering services so versatile and appealing. The establishment has an illustrious history as 'brown café' in the Nieuwmarkt area, where it has been the scene of many a drink and game of cards. Where local residents, squatters, students and the nightlife public met each other and pondered life, politics and the price of beer, all whilst enjoying their drinks. These days, Van Beeren is just a real Amsterdam pub, focused mostly on good food.

Elderly residents of the Nieuwmarkt area will remember that Koningsstraat 54 has not always been a restaurant. For decades, these locals bought their beets and cabbages at Gerrit van Beeren Senior. One of the first mentions of industry on Koningsstraat 54 dates from the year 1900, when a certain Frederik van Drecht purchased the business property for the - in those days - astronomical amount of 5.000 guilders, and had it renovated for another 11.000. In 1936 Gerrit van Beeren Senior opens a greengrocery on the address. He was not the only one to have come up with that idea, because at that moment, the Koningsstraat and the Korte Koningsstraat already held four greengrocer’s. At the same time, the Koningsstraat was filled with dozens of little shops and business: a shoe repairman, butcher shop, cigar shop, printer, and a liquor- and Dutch gin distillery. From the start, Gerrit’s son Gerrie joined his father to the city’s central market, which had just been moved to the Jan van Galenstraat. From that moment on, he started working in his father’s shop, and took over the business in 1954.

In the early 80’s, the time of local neighbourhood shops is coming to an end. Supermarket franchises and pre-packaged food are gaining the upper hand. This trend does not escape Gerrit’s notice, and he decides to keep abreast of the times: the message being ‘beets turn into beers’, he rebuilds his greengrocer’s into a café that opens its doors on the 9th of July, 1982. A splendid oaken bar with copper tap and sink is installed, and the meranti wainscoting is put together by Gerrit’s son-in-law. As early as September 1982, food is available at café Gerrit van Beeren: daughters Coby and Mieke are employed in the business and serve a bite, four days a week: meatballs, satay and hotchpotch. The café quickly builds up an illustrious reputation around the Nieuwmarkt as a place where birds of all different feathers flocked together: punk rockers, squatters, students and neighbourhood locals. Until all hours, drinks are being served at the oaken bar with copper tap, and card games take place where stakes include mopeds, bicycles and the day’s tips. During those years, Gerrit van Beeren develops into a sort of chief of the Nieuwmarkt area. He knows everything and everyone, and is always willing to lend a helping hand. Penniless students can work to pay off their bar tabs, and hungry artists can trade in their artwork for a warm meal. In 1988 the café is officially redubbed a pub focused on serving meals: the kitchen, formerly located at the back of the establishment, disappears to the basement. A special is served everyday for 9,98 guilders.

In 1994 Gerrit sells his pub, and moves to Leidseplein, where he takes over Café Eijlders. The building itself, however, remains property of the van Beeren family, and, until this day, daughters Coby and Mieke rent out the establishment to the current proprietors: Roelien, who was born and raised in the Nieuwmarkt area and got her first job in the kitchen at Eetcafé van Beeren in 1999, and chef Pim, who found his way to the pub soon after he had completed catering college, and has been working there ever since 2003.

The menu offers a wide range of diverse dishes. More is served than just the typical pub foods like chicken satay and schnitzels. Tournedos with fresh, caramelized, cocktail onions or fried bass accompanied by a fennel salad are some of the pleasant surprises that are also available. Additionally, we offer classic dishes like choux pastry with chocolate sauce and vanilla ice cream; spareribs, or mussels (during season).

Our daily special is available for € 14,00. This main course varies from classic Dutch ‘stamppot’ in winter to Asian dishes or a main course salad with chips in summer. Even a tender, grilled chicken or a salmon pasta can be offered as daily special. These specials are much in demand, limited in supply, and cannot be reserved, so be early!
For the vegans among us, there is also plenty of choice in our range, at least a starter, main and dessert.
There are also vegan options on certain dishes, such as the teriyaki chicken salad, which is served as a vegan option with vegan chicken pieces.

In Addition to the Menu

Per season, we also offer a few courses in addition to the menu; these can be found on the three big blackboards. These consist of recipes like deer Carpaccio with a fig dressing, or rib-eye with mushroom gravy.
As you can see, Eetcafé van Beeren offers you an extensive menu with varying dishes. Not only per season, but per day you will constantly come across new, alluring meals. Characteristic of our kitchen is that we use daily fresh, organic vegetables, and that we ourselves prepare as many of our primary ingredients as possible.

In collaboration with Wines Unlimited, we have composed this fabulous wine list of unadulterated wines, meaning that all these wines have been produced using the latest technology, resulting in clean pure wines. with virtually no corrections and additives needed. All our wine producers are sustainable and organic.

Have a look at some of our meals

The Garden amongst Gardens... 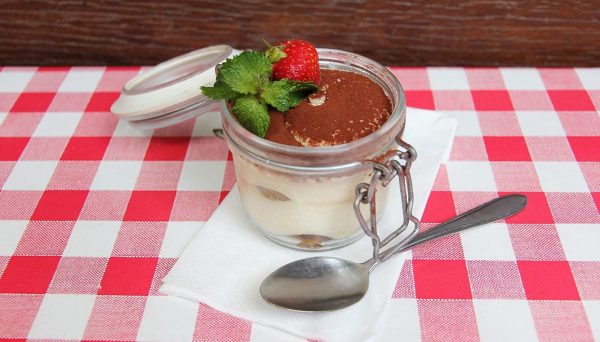 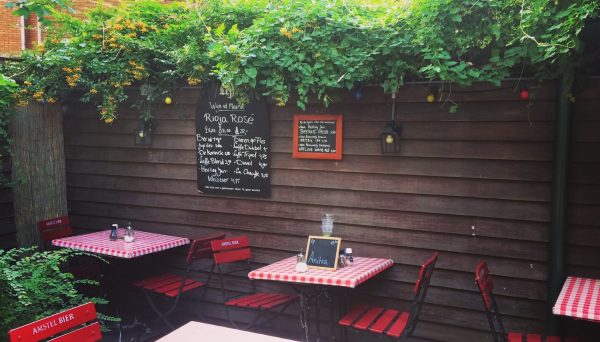 During spring and summer you can also enjoy a pleasant meal in our romantic inner garden, behind the restaurant. Here you can find an oasis of peace and quiet, right in the middle of the centre of Amsterdam. However, eating outside is tied to our agreement with the city council and our neighbours that the garden closes at 22.30. We do this to keep things peaceful and to keep inconveniences at a minimum. Therefore, we would kindly like to ask for your understanding and cooperation. Naturally, after 22.30, you can resume the rest of your evening inside. Usually, we can only indicate whether the garden will be opened on the day itself, since the Dutch weather is not always equally stable, and the garden is not covered. It might even occur, that we can only decide at 17.00 what we will be doing that particular night.

At Eetcafé van Beeren, it is possible to make a reservation for a table. You can do so by clicking on the button below or call us after 16.00 on +31206222329. We are also welcoming groups into our restaurant. If you want to make a reservation for groups bigger than 6 persons, please contact us by our phone number. So we can see what can be arranged. It might happen that your call is not answered, which usually means there is a call waiting; try again later.

Eetcafé van Beeren is situated in the Nieuwmarkt area in the centre of Amsterdam. Our adress is Koningsstraat 54. From Central Station it is about a 10 minute walk to van Beeren.

You can also easily find us travelling by public transport. If you take the underground, get off at the Nieuwmarkt stop, and take the Koningsstraat exit. Once you are outside, rake a right and after 50 meters you will have reached van Beeren.

We advise you not to come by car, because there is very little parking available in the area and parking rates per hour are very high in the centre of Amsterdam. Parking lot Parkeergarage Waterlooplein on the Valkenburgerstraat is a good alternative at about a 10 minute walk. 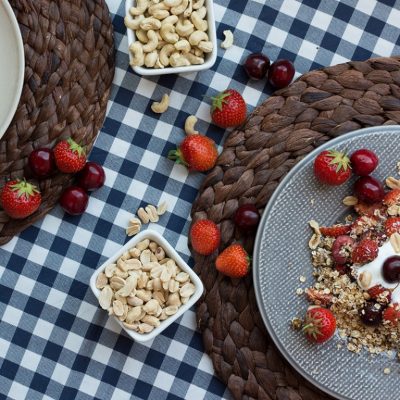 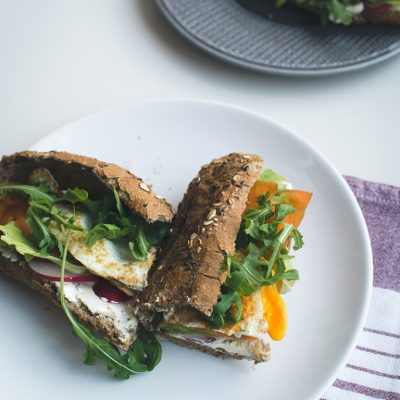 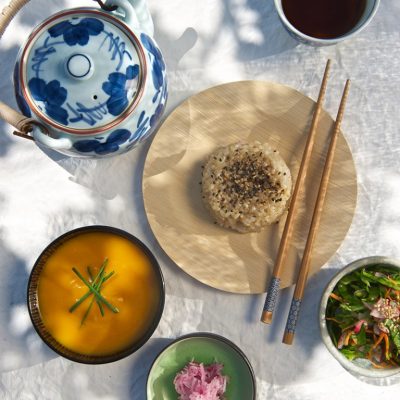